Linc wasn't interested in hearing replays of anecdotes that had already been old long ago. "So what's new?" he asked. Chips stared down as his hands, spreading his fingers. He was wearing a lot of rings these days, Linc noticed. "Kyle's still around, running the collections ...." Chips paused, as if considering whether to confide something weighty. "As a matter of fact, we might be working something out - you know, sharing some of the action. He made me this proposition ...." It was strange. Linc had practically forgotten about Kyle. He could remember nights when he had lain awake nursing the rage that had burned in him, consoling himself by rehearsing in his mind how he would get even. And not just with Kyle but also the man called Carolton, whom Breece had said Kyle worked for. But somehow over the months that had slowly changed ... and now it just didn't matter anymore. Linc had seen things that Kyle could never know. He could no longer hate a man he didn't envy.

A physicist that I know commented that many other scientific disciplines, such as geology, anthropology, astronomy, are also challenged by biblical fundamentalism, but their people seem to be able to get on with their work without worrying unduly. Only Darwinians seem thrown into a fr . . . Read more 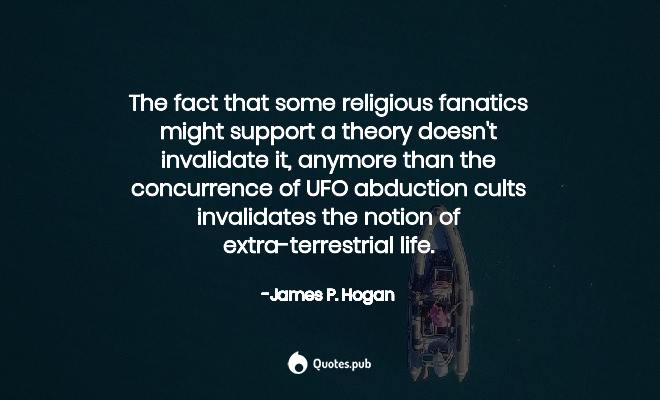 The fact that some religious fanatics might support a theory doesn't invalidate it, anymore than the concurrence of UFO abduction cults invalidates the notion of extra-terrestrial life.

Download
Linc didn't know if it was his imagination, but the streets seemed to have gotten older and dirtier - more so, surely, then was possible in the time that had gone by. What he remembered as the center of where the action was, and where all of life happened had turned into tired and sha . . . Read more

I can tap George at the deli. He owes me—"Linc waved the rest aside with a shake of his head and peeled a fifty off a roll he produced from his belt."Say, are you sure? . . ." But his father was already reaching for it. "I'll have it back for you by—" . . . Read more

The scene beyond was eerie - a tortured jungle of torn pipes and jagged twisted-metal sculptures rearing up out of nightmare chasms of shadow being cast by a few emergency lamps glowing dull red to preserve night vision. As her eyes adjusted to the gloom, she made out several shadowy . . . Read more

Respect was a big word in Linc's vocabulary. It meant being selective and paying attention to things that mattered and people who made differences. And respect for oneself meant being valuable enough to make sure they would notice you. That was the key to doing better than jus . . . Read more