How baffling you are, oh Church, and yet how I love you! How you have made me suffer, and yet how much I owe you! I would like to see you destroyed, and yet I need your presence. You have given me so much scandal and yet you have made me understand what sanctity is. I have seen nothing in the world more devoted to obscurity, more compromised, more false, and yet I have touched nothing more pure, more generous, more beautiful. How often I have wanted to shut the doors of my soul in your face, and how often I have prayed to die in the safety of your arms. No, I cannot free myself from you, because I am you, though not completely. And besides, where would I go? Would I establish another? I would not be able to establish it without the same faults, for they are the same faults I carry in me. And if I did establish another, it would be my Church, not the Church of Christ. I am old enough to know that I am no better than anyone else. …) The Church has the power to make me holy but it is made up, from the first to the last, only of sinners. And what sinners! It has the omnipotent and invincible power to renew the Miracle of the Eucharist, but is made up of men who are stumbling in the dark, who fight every day against the temptation of losing their faith. It brings a message of pure transparency but it is incarnated in slime, such is the substance of the world. It speaks of the sweetness of its Master, of its non-violence, but there was a time in history when it sent out its armies to disembowel the infidels and torture the heretics. It proclaims the message of evangelical poverty, and yet it does nothing but look for money and alliances with the powerful. Those who dream of something different from this are wasting their time and have to rethink it all. And this proves that they do not understand humanity. Because this is humanity, made visible by the Church, with all its flaws and its invincible courage, with the Faith that Christ has given it and with the love that Christ showers on it. When I was young, I did not understand why Jesus chose Peter as his successor, the first Pope, even though he abandoned Him. Now I am no longer surprised and I understand that by founding his church on the tomb of a traitor(…)He was warning each of us to remain humble, by making us aware of our fragility. (…) And what are bricks worth anyway? What matters is the promise of Christ, what matters is the cement that unites the bricks, which is the Holy Spirit. Only the Holy Spirit is capable of building the church with such poorly moulded bricks as are we. And that is where the mystery lies. This mixture of good and bad, of greatness and misery, of holiness and sin that makes up the church…this in reality am I .(…) The deep bond between God and His Church, is an intimate part of each one of us. (…)To each of us God says, as he says to his Church, “And I will betroth you to me forever” (Hosea 2,21). But at the same time he reminds us of reality: 'Your lewdness is like rust. I have tried to remove it in vain. There is so much that not even a flame will take it away' (Ezechiel 24, 12). But then there is even something more beautiful. The Holy Spirit who is Love, sees us as holy, immaculate, beautiful under our guises of thieves and adulterers. (…) It’s as if evil cannot touch the deepest part of mankind. He re-establishes our virginity no matter how many times we have prostituted our bodies, spirits and hearts. In this, God is truly God, the only one who can ‘make everything new again’. It is not so important that He will renew heaven and earth. What is most important is that He will renew our hearts. This is Christ’s work. This is the divine Spirit of the Church. 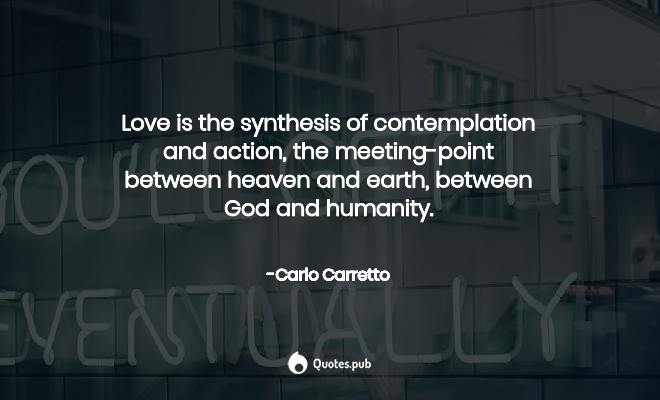 Love is the synthesis of contemplation and action, the meeting-point between heaven and earth, between God and humanity. 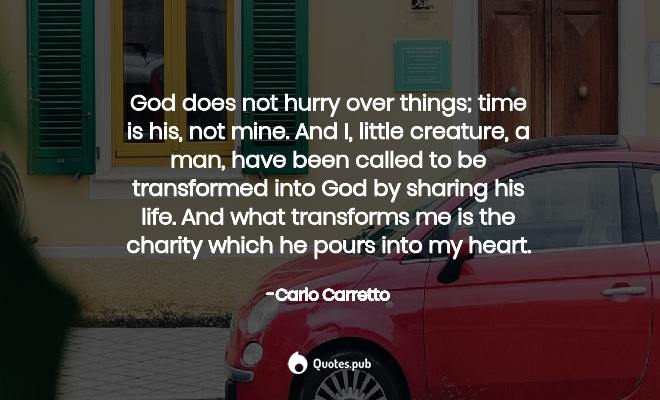 God does not hurry over things; time is his, not mine. And I, little creature, a man, have been called to be transformed into God by sharing his life. And what transforms me is the charity which he pours into my heart.

Download
So true prayer demands that we be more passive than active; it requires more silence than words, more adoration than study, more concentration than rushing about, more faith than reason. We must understand thoroughly that true prayer is a gift from heaven to earth, the Father to his c . . . Read more

Those who believe that they can speak of what is in the depths of their own soul betray their own inexperience. My God, what an adventure it is, not to understand any longer, nor be able to see. If earlier we possessed “something,” love has now reduced us to nothing. Yes, love has . . . Read more 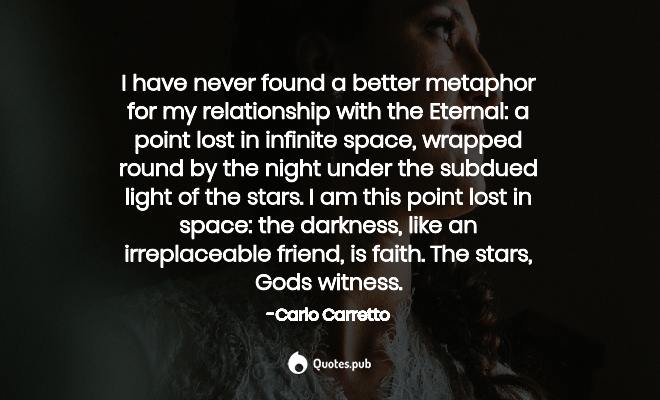 I have never found a better metaphor for my relationship with the Eternal: a point lost in infinite space, wrapped round by the night under the subdued light of the stars. I am this point lost in space: the darkness, like an irreplaceable friend, is faith. The stars, Gods witness.

Download
The darkness is necessary, the darkness of faith is necessary, for God's light is too great. It wounds. I understand more and more that faith is not a mysterious and cruel trick of a God who hides himself without telling me why, but a necessary veil. My discovery of him takes place gr . . . Read more

What is our life on earth, if not discovering, becoming conscious of, penetrating, contemplating, accepting, loving this mystery of Gods, the unique reality which surrounds us, and in which we are immersed like meteorites in space? “In God we live and move and have our being” (Act . . . Read more

Thus, after so many years, I feel I have found the solution to the only real problem we have on earth. I have recognized my powerlessness and this was grace. In faith, hope and love I have contemplated the all-power-fulness of God and this, too, was grace. God can do everything and I . . . Read more