From an interview with Susie Bright: SB: You were recently reviewed by the New York Times. How do you think the mainstream media regards sex museums, schools and cultural centers these days? What's their spin versus your own observations? [Note: Here's the article Susie mentions: http://www.nytimes.com/2005/12/05/nat... ] CQ: Lots of people have seen the little NY Times article, which was about an event we did, the Belle Bizarre Bazaar -- a holiday shopping fair where most of the vendors were sex workers selling sexy stuff. Proceeds went to our Exotic Dancers' Education Project, providing dancers with skills that will help them maximize their potential and choices. This event got into the Times despite the worries of its author, a journalist who'd been posted over by her editor. She thought the Times was way too conservative for the likes of us, which may be true, except they now have so many column inches to fill with distracting stuff that isn't about Judith Miller! The one thing the Times article does not do is present the spectrum of the Center for Sex & Culture's work, especially the academic and serious side of what we do. This, I think, points to the real answer to your question: mainstream media culture remains quite nervous and touchy about sex-related issues, especially those that take sex really seriously. A frivolous take (or a good, juicy, shocking angle) on a sex story works for the mainstream press: a sex-positive and serious take, not so much. When the San Francisco Chronicle did its article about us a year ago, the writer focused just on our porn collection. Now, we very much value that, but we also collect academic journals and sex education materials, and not a word about those! I think this is one really essential linchpin of sex-negative or erotophobic culture, that sex is only allowed to be either light or heavy, and when it's heavy, it's about really heavy issues like abuse. Recently I gave some quotes about something-or-other for a Cosmo story and the editors didn't want to use the term "sexologist" to describe me, saying that it wasn't a real word! You know, stuff like that from the Times would not be all that surprising, but Cosmo is now policing the language? Please! 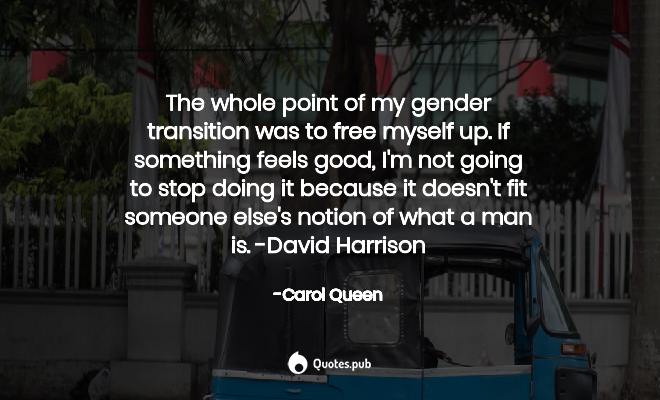 The whole point of my gender transition was to free myself up. If something feels good, I'm not going to stop doing it because it doesn't fit someone else's notion of what a man is. -David Harrison 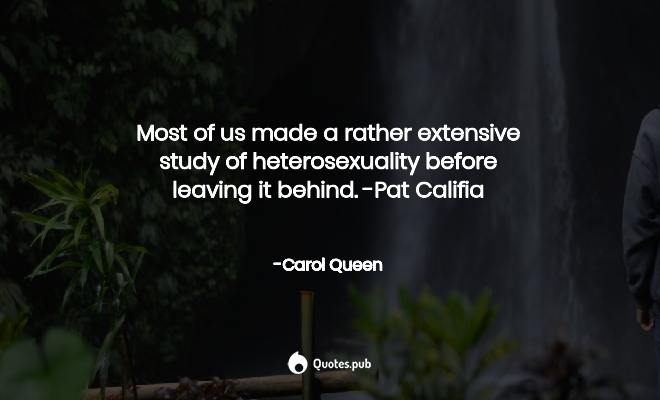 Most of us made a rather extensive study of heterosexuality before leaving it behind. -Pat Califia

Basing your identity on sexuality is like building a house on a foundation of pudding. - D. Travers Scott 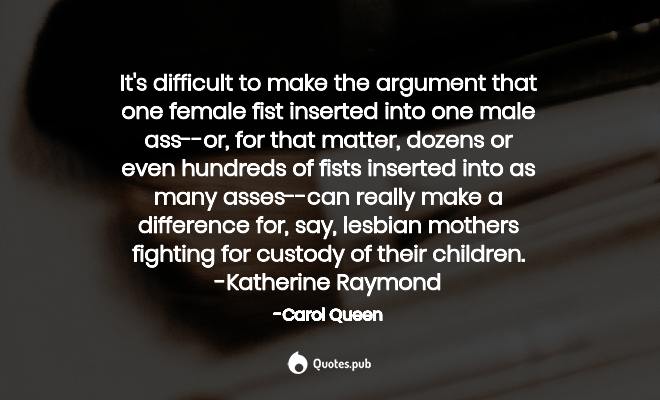 It's difficult to make the argument that one female fist inserted into one male ass--or, for that matter, dozens or even hundreds of fists inserted into as many asses--can really make a difference for, say, lesbian mothers fighting for custody of their children. -Katherine Raymond 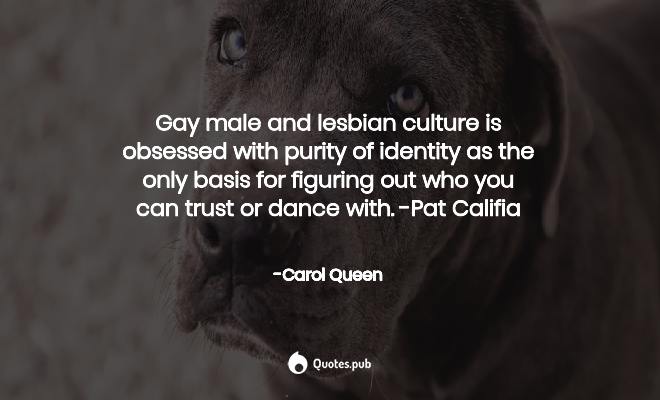 Gay male and lesbian culture is obsessed with purity of identity as the only basis for figuring out who you can trust or dance with. -Pat Califia