Almost as an article of faith, some individuals believe that conspiracies are either kooky fantasies or unimportant aberrations. To be sure, wacko conspiracy theories do exist. There are people who believe that the United States has been invaded by a secret United Nations army equipped with black helicopters, or that the country is secretly controlled by Jews or gays or feminists or black nationalists or communists or extraterrestrial aliens. But it does not logically follow that all conspiracies are imaginary. Conspiracy is a legitimate concept in law: the collusion of two or more people pursuing illegal means to effect some illegal or immoral end. People go to jail for committing conspiratorial acts. Conspiracies are a matter of public record, and some are of real political significance. The Watergate break-in was a conspiracy, as was the Watergate cover-up, which led to Nixon’s downfall. Iran-contra was a conspiracy of immense scope, much of it still uncovered. The savings and loan scandal was described by the Justice Department as “a thousand conspiracies of fraud, theft, and bribery,” the greatest financial crime in history. Often the term “conspiracy” is applied dismissively whenever one suggests that people who occupy positions of political and economic power are consciously dedicated to advancing their elite interests. Even when they openly profess their designs, there are those who deny that intent is involved. In 1994, the officers of the Federal Reserve announced they would pursue monetary policies designed to maintain a high level of unemployment in order to safeguard against “overheating” the economy. Like any creditor class, they preferred a deflationary course. When an acquaintance of mine mentioned this to friends, he was greeted skeptically, “Do you think the Fed bankers are deliberately trying to keep people unemployed?” In fact, not only did he think it, it was announced on the financial pages of the press. Still, his friends assumed he was imagining a conspiracy because he ascribed self-interested collusion to powerful people. At a World Affairs Council meeting in San Francisco, I remarked to a participant that U.S. leaders were pushing hard for the reinstatement of capitalism in the former communist countries. He said, “Do you really think they carry it to that level of conscious intent?” I pointed out it was not a conjecture on my part. They have repeatedly announced their commitment to seeing that “free-market reforms” are introduced in Eastern Europe. Their economic aid is channeled almost exclusively into the private sector. The same policy holds for the monies intended for other countries. Thus, as of the end of 1995, “more than $4.5 million U.S. aid to Haiti has been put on hold because the Aristide government has failed to make progress on a program to privatize state-owned companies” (New York Times 11/25/95). Those who suffer from conspiracy phobia are fond of saying: “Do you actually think there’s a group of people sitting around in a room plotting things?” For some reason that image is assumed to be so patently absurd as to invite only disclaimers. But where else would people of power get together – on park benches or carousels? Indeed, they meet in rooms: corporate boardrooms, Pentagon command rooms, at the Bohemian Grove, in the choice dining rooms at the best restaurants, resorts, hotels, and estates, in the many conference rooms at the White House, the NSA, the CIA, or wherever. And, yes, they consciously plot – though they call it “planning” and “strategizing” – and they do so in great secrecy, often resisting all efforts at public disclosure. No one confabulates and plans more than political and corporate elites and their hired specialists. To make the world safe for those who own it, politically active elements of the owning class have created a national security state that expends billions of dollars and enlists the efforts of vast numbers of people.

The essence of capitalism is to turn nature into commodities and commodities into capital. The live green earth is transformed into dead gold bricks, with luxury items for the few and toxic slag heaps for the many. The glittering mansion overlooks a vast sprawl of shanty towns, wherei . . . Read more 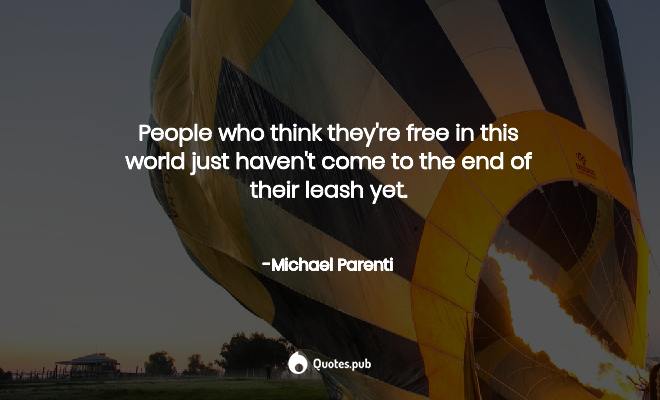 People who think they're free in this world just haven't come to the end of their leash yet. 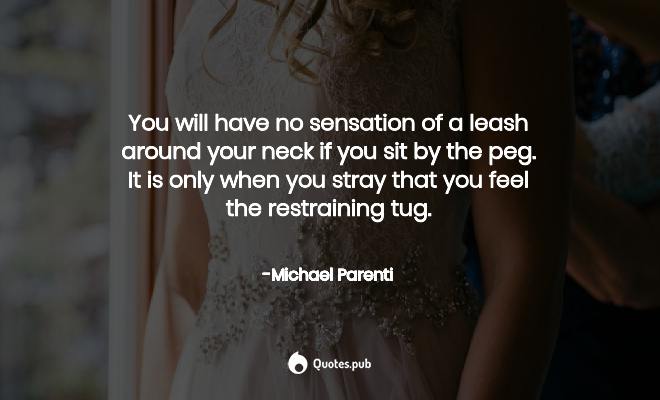 You will have no sensation of a leash around your neck if you sit by the peg. It is only when you stray that you feel the restraining tug. 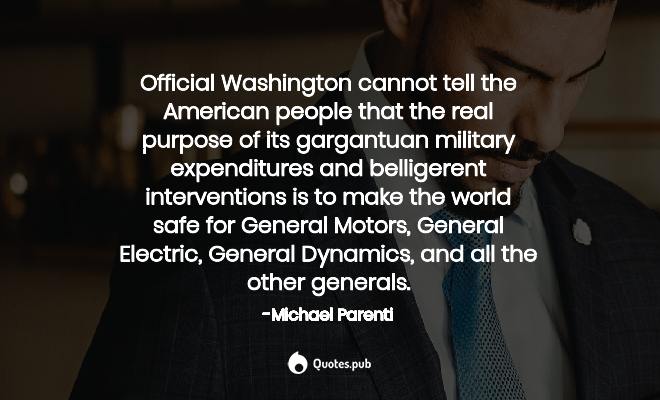 Official Washington cannot tell the American people that the real purpose of its gargantuan military expenditures and belligerent interventions is to make the world safe for General Motors, General Electric, General Dynamics, and all the other generals. 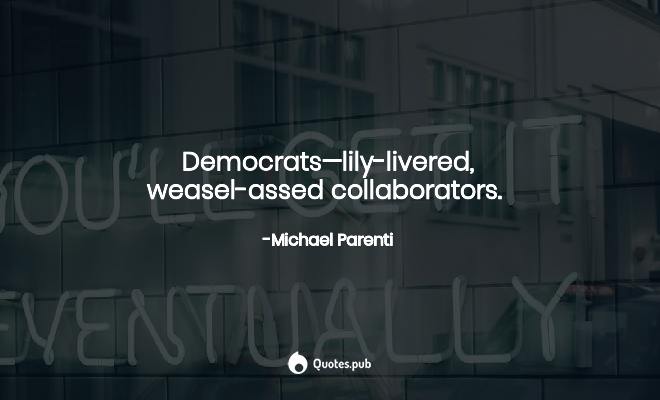 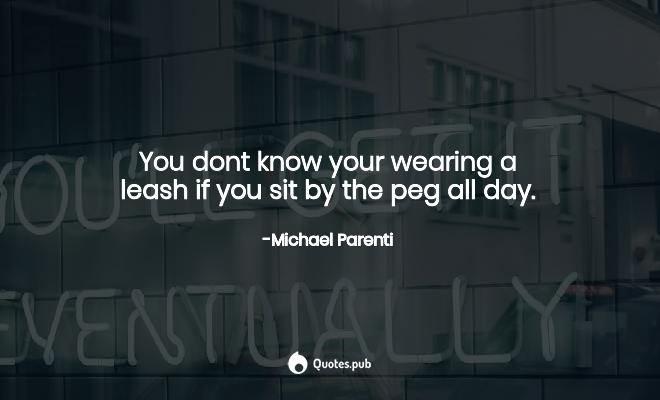 You dont know your wearing a leash if you sit by the peg all day. 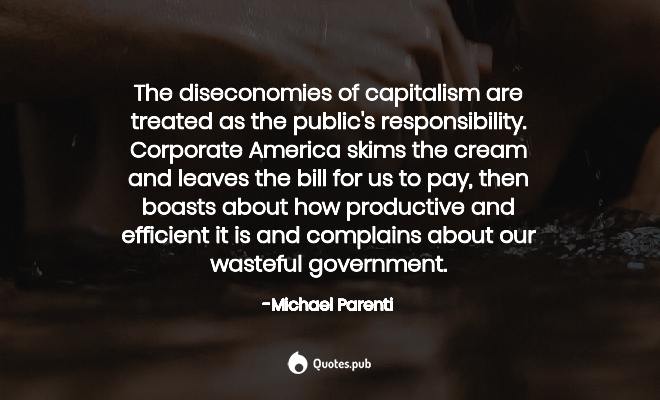 The diseconomies of capitalism are treated as the public's responsibility. Corporate America skims the cream and leaves the bill for us to pay, then boasts about how productive and efficient it is and complains about our wasteful government. 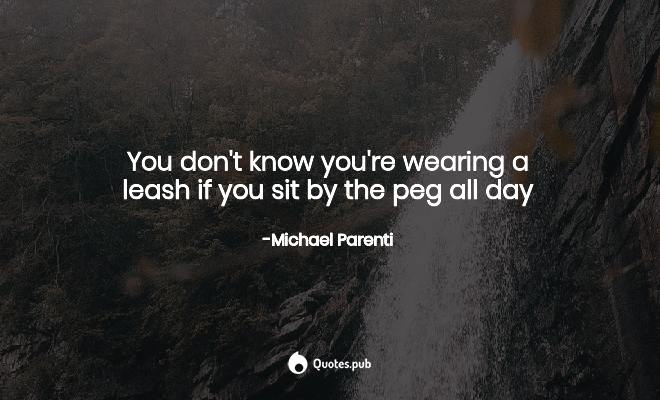