1 = Very important. Do this at once. 2 = Worth doing but takes more time. Start planning it. 3 = Yes and no. Depends on how it’s done. 4 = Not very important. May even be a waste of effort. 5 = No! Don’t do this. Fill in those numbers before you read further, and take your time. This is not a simple situation, and solving it is a complicated undertaking. Possible Actions to Take ____ Explain the changes again in a carefully written memo. ____ Figure out exactly how individuals’ behavior and attitudes will have to change to make teams work. ____ Analyze who stands to lose something under the new system. ____ Redo the compensation system to reward compliance with the changes. ____ “Sell” the problem that is the reason for the change. ____ Bring in a motivational speaker to give employees a powerful talk about teamwork. ____ Design temporary systems to contain the confusion during the cutover from the old way to the new. ____ Use the interim between the old system and the new to improve the way in which services are delivered by the unit—and, where appropriate, create new services. ____ Change the spatial arrangements so that the cubicles are separated only by glass or low partitions. ____ Put team members in contact with disgruntled clients, either by phone or in person. Let them see the problem firsthand. ____ Appoint a “change manager” to be responsible for seeing that the changes go smoothly. ____ Give everyone a badge with a new “teamwork” logo on it. ____ Break the change into smaller stages. Combine the firsts and seconds, then add the thirds later. Change the managers into coordinators last. ____ Talk to individuals. Ask what kinds of problems they have with “teaming.” ____ Change the spatial arrangements from individual cubicles to group spaces. ____ Pull the best people in the unit together as a model team to show everyone else how to do it. ____ Give everyone a training seminar on how to work as a team. ____ Reorganize the general manager’s staff as a team and reconceive the GM’s job as that of a coordinator. ____ Send team representatives to visit other organizations where service teams operate successfully. ____ Turn the whole thing over to the individual contributors as a group and ask them to come up with a plan to change over to teams. ____ Scrap the plan and find one that is less disruptive. If that one doesn’t work, try another. Even if it takes a dozen plans, don’t give up. ____ Tell them to stop dragging their feet or they’ll face disciplinary action. ____ Give bonuses to the first team to process 100 client calls in the new way. ____ Give everyone a copy of the new organization chart. ____ Start holding regular team meetings. ____ Change the annual individual targets to team targets, and adjust bonuses to reward team performance. ____ Talk about transition and what it does to people. Give coordinators a seminar on how to manage people in transition. There are no correct answers in this list, but over time I’ve

Topics : Managing Transitions: Making the Most of Change Quotes 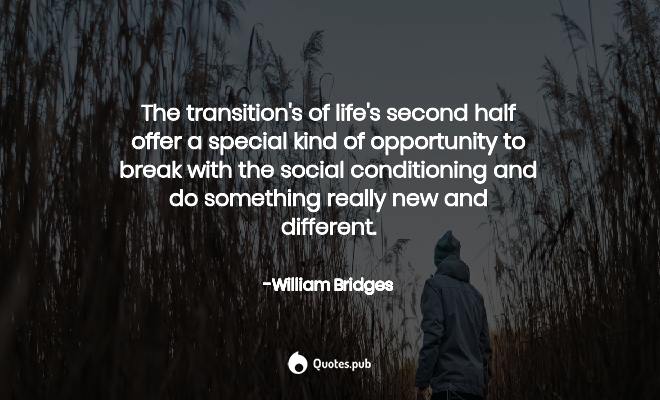 The transition's of life's second half offer a special kind of opportunity to break with the social conditioning and do something really new and different. 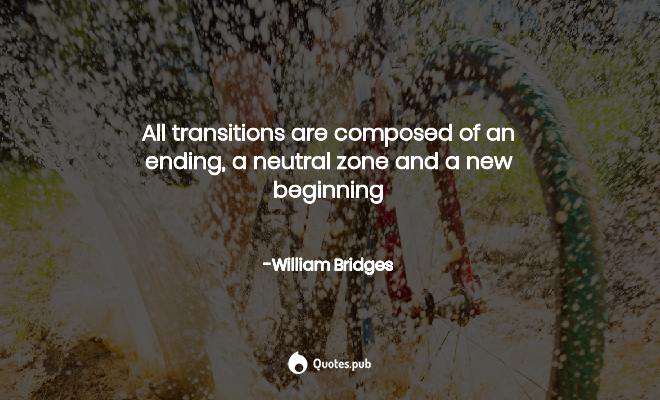 All transitions are composed of an ending, a neutral zone and a new beginning 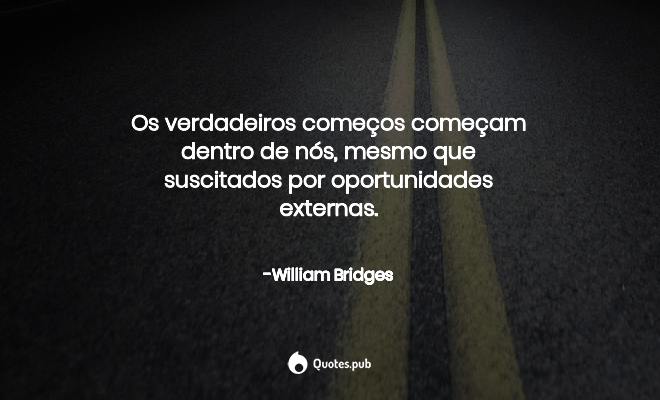 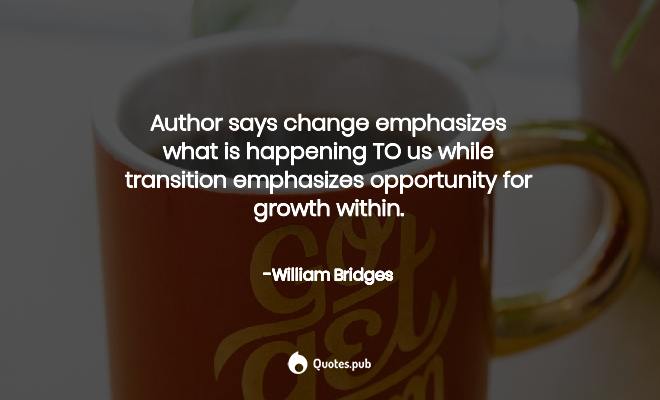 Author says change emphasizes what is happening TO us while transition emphasizes opportunity for growth within.

Download
And although it may be hard to think about larger issues while you are in the immediate turmoil of a transition, you must finally deal with them if you are to understand not only what is happening, but why, when, and how it is happening. In other words, I am not telling you to stop ba . . . Read more