37 Janet Malcolm Quotes on Literary criticism, The Journalist and the Murderer and The Silent Woman: Sylvia Plath and Ted Hughes - Quotes.pub

Here you will find all the famous Janet Malcolm quotes. There are more than 37+ quotes in our Janet Malcolm quotes collection. We have collected all of them and made stunning Janet Malcolm wallpapers & posters out of those quotes. You can use this wallpapers & posters on mobile, desktop, print and frame them or share them on the various social media platforms. You can download the quotes images in various different sizes for free. In the below list you can find quotes in various categories like Literary criticism, The Journalist and the Murderer and The Silent Woman: Sylvia Plath and Ted Hughes

Life, of course, never gets anyone's entire attention. Death always remains interesting, pulls us, draws us. As sleep is necessary to our physiology, so depression seems necessary to our psychic economy. In some secret way, Thanatos nourishes Eros as well as opposes it. The two princi . . . Read more 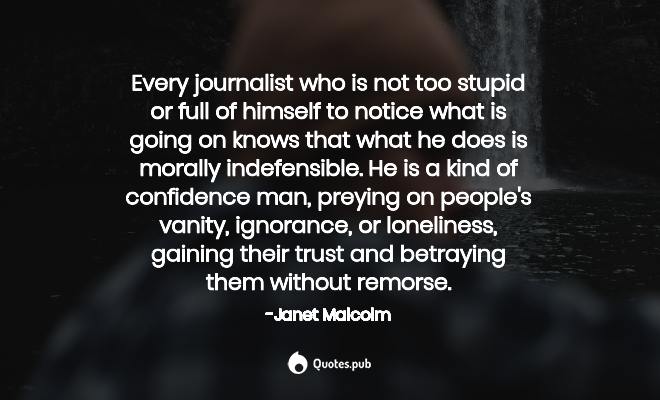 Every journalist who is not too stupid or full of himself to notice what is going on knows that what he does is morally indefensible. He is a kind of confidence man, preying on people's vanity, ignorance, or loneliness, gaining their trust and betraying them without remorse. 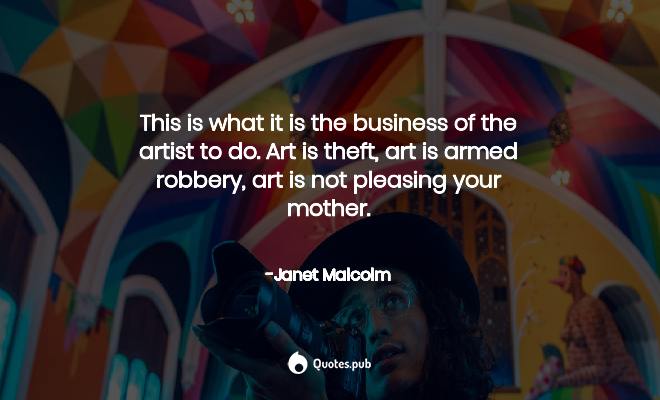 This is what it is the business of the artist to do. Art is theft, art is armed robbery, art is not pleasing your mother.

Download
I hope each of us owns the facts of her or his own life," Hughes wrote in a letter to the Independent in April, 1989, when he had been goaded by a particularly intrusive article. But, of course, as everyone knows who has ever heard a piece of gossip, we do not "own" the facts of our l . . . Read more

...a fundamental rule of journalism, which is to tell a story and stick to it. The narratives of journalism (significantly called "stories"), like those of mythology and folklore, derive their power from their firm, undeviating sympathies and antipathies. Cinderella must remain good a . . . Read more

Something seems to happen to people when they meet a journalist, and what happens is exactly the opposite of what one would expect. One would think that extreme wariness and caution would be the order of the day, but in fact childish trust and impetuosity are far more common. The jour . . . Read more 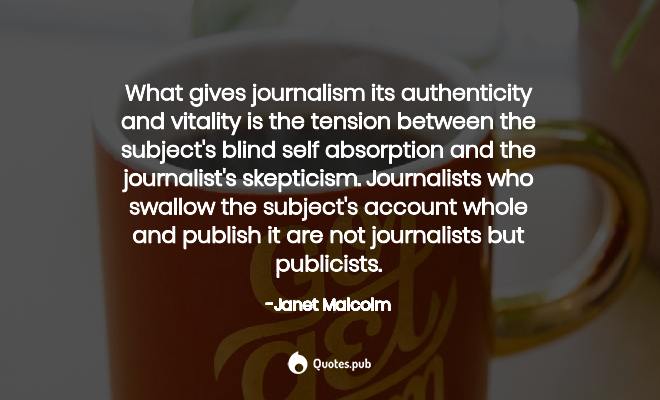 What gives journalism its authenticity and vitality is the tension between the subject's blind self absorption and the journalist's skepticism. Journalists who swallow the subject's account whole and publish it are not journalists but publicists. 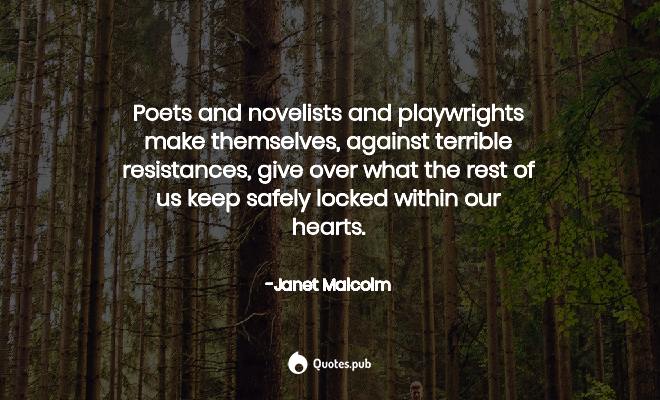 Poets and novelists and playwrights make themselves, against terrible resistances, give over what the rest of us keep safely locked within our hearts. 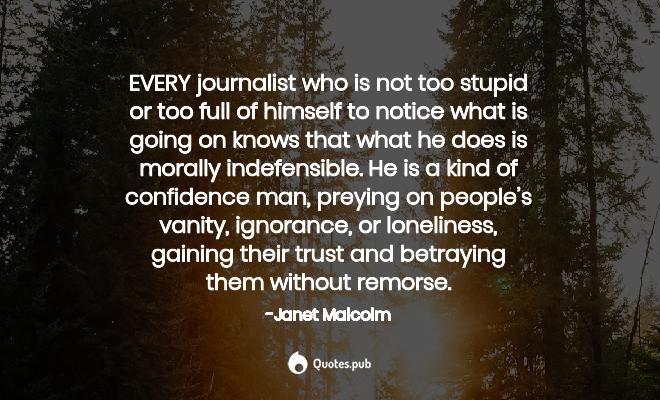 EVERY journalist who is not too stupid or too full of himself to notice what is going on knows that what he does is morally indefensible. He is a kind of confidence man, preying on people’s vanity, ignorance, or loneliness, gaining their trust and betraying them without remorse. 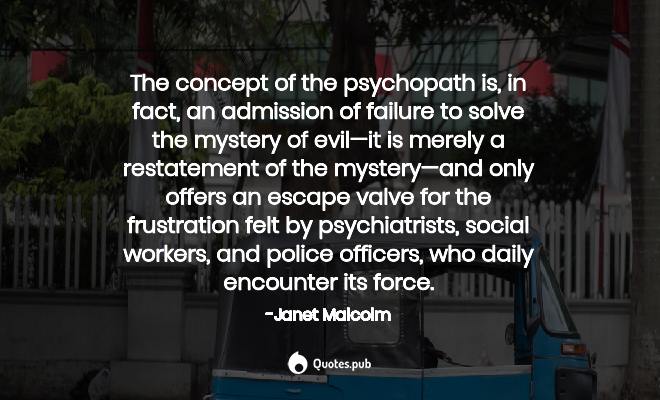 The concept of the psychopath is, in fact, an admission of failure to solve the mystery of evil—it is merely a restatement of the mystery—and only offers an escape valve for the frustration felt by psychiatrists, social workers, and police officers, who daily encounter its force. 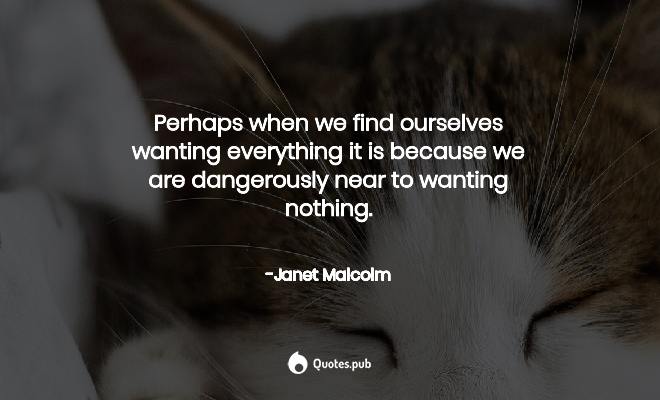 Perhaps when we find ourselves wanting everything it is because we are dangerously near to wanting nothing. 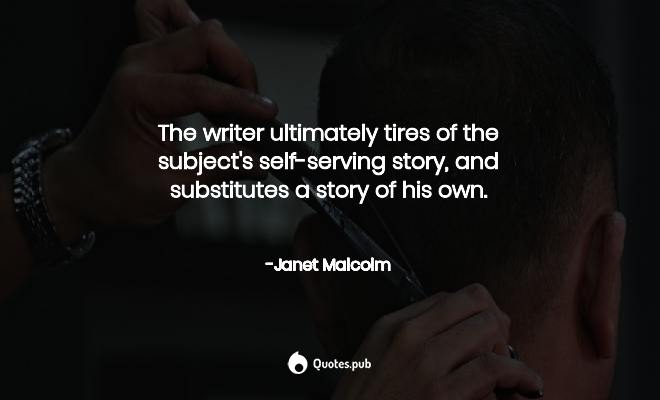 The writer ultimately tires of the subject's self-serving story, and substitutes a story of his own.

Download
In the common perception, there is something unseemly about young people getting rich. Getting rich is supposed to be the reward for hard work, preferably arriving when you are too old to enjoy it. And the spectacle of young millionaires who made their bundle not from business or crim . . . Read more 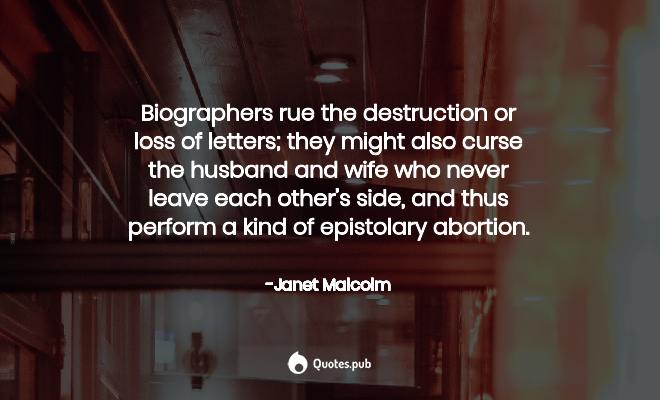 Biographers rue the destruction or loss of letters; they might also curse the husband and wife who never leave each other’s side, and thus perform a kind of epistolary abortion. 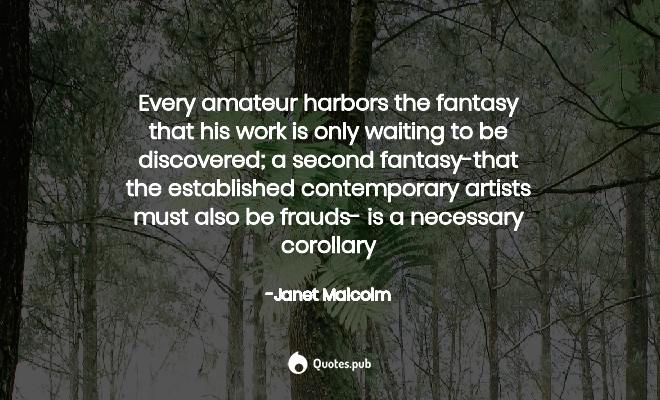 Every amateur harbors the fantasy that his work is only waiting to be discovered; a second fantasy-that the established contemporary artists must also be frauds- is a necessary corollary 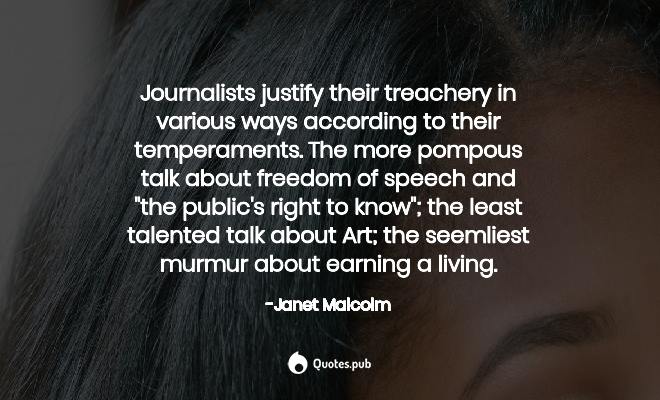 Journalists justify their treachery in various ways according to their temperaments. The more pompous talk about freedom of speech and "the public's right to know"; the least talented talk about Art; the seemliest murmur about earning a living.

Download
Every journalist who is not too stupid or too full of himself to notice what is going on knows that what he does is morally indefensible. He is a kind of confidence man, preying on people's vanity, ignorance or loneliness, gaining their trust and betraying them without remorse. Like t . . . Read more

The subject of a piece of writing has not suffered the tension and anxiety endured by the subject of the "Eichmann experiment" (as it has been called) - on the contrary, he has been on a sort of narcissist's holiday during the period of interviews - but when the moment of peripeteia c . . . Read more 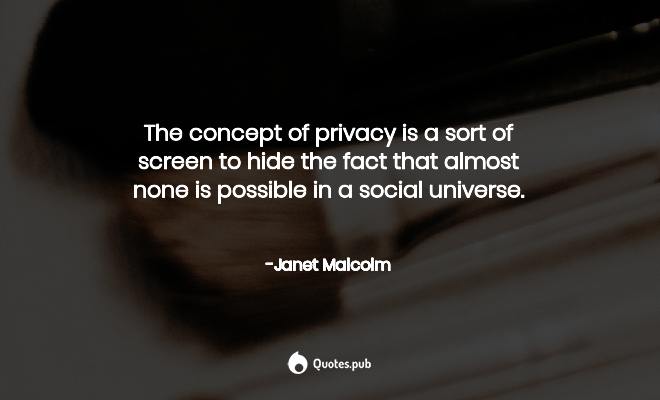 The concept of privacy is a sort of screen to hide the fact that almost none is possible in a social universe.

Download
As you no doubt gathered, I do not devote the care to word selection and organization in my letters that I do in my books Generally, I don't write letters at all...Writing, for me, is work, and I do not like to do my work carelessly, but if I waited until I got a letter into the shape . . . Read more

Biography is the medium through which the remaining secrets of the famous dead are taken from them and dumped out in full view of the world. The biographer at work, indeed, is like the professional burglar, breaking into a house, rifling through certain drawers that he has good reason . . . Read more 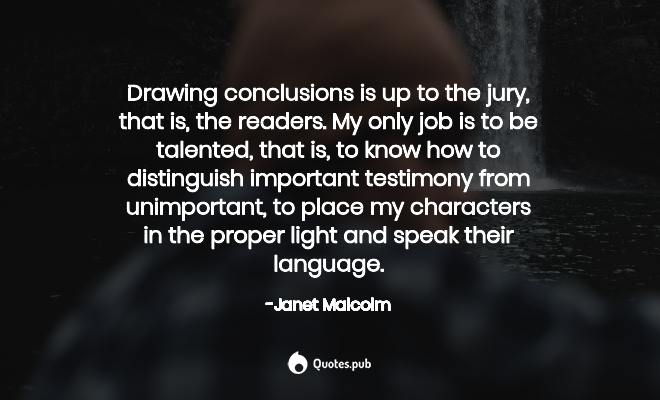 Drawing conclusions is up to the jury, that is, the readers. My only job is to be talented, that is, to know how to distinguish important testimony from unimportant, to place my characters in the proper light and speak their language. 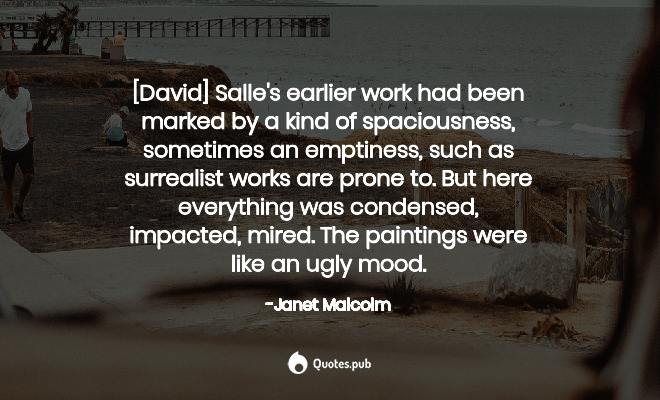 [David] Salle's earlier work had been marked by a kind of spaciousness, sometimes an emptiness, such as surrealist works are prone to. But here everything was condensed, impacted, mired. The paintings were like an ugly mood.

Download
[David] Salle's studio, on the second floor of a five-story loft building, is a long room lit with bright, cold overhead light. It is not a beautiful studio. Like the streets outside, it gives no quarter to the visitor in search of the picturesque. It doesn't even have a chair for the . . . Read more

Newspaper stories that were originally written to satisfy our daily hunger for idle and impersonal Schadenfreude—to excite and divert and be forgotten the next week—now take their place among serious sources of information and fact, and are treated as if they themselves were not s . . . Read more

The voices began to take over the book and to speak to the reader over the biographer’s head. They whispered, “Listen to me, not to her. I am authentic. I speak with authority. Go to the full texts of the journals, the letters home, and the rest. They will tell you what you want to know. 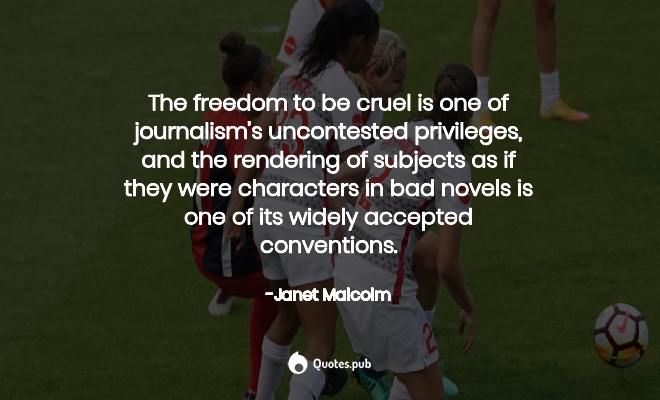 The freedom to be cruel is one of journalism’s uncontested privileges, and the rendering of subjects as if they were characters in bad novels is one of its widely accepted conventions. 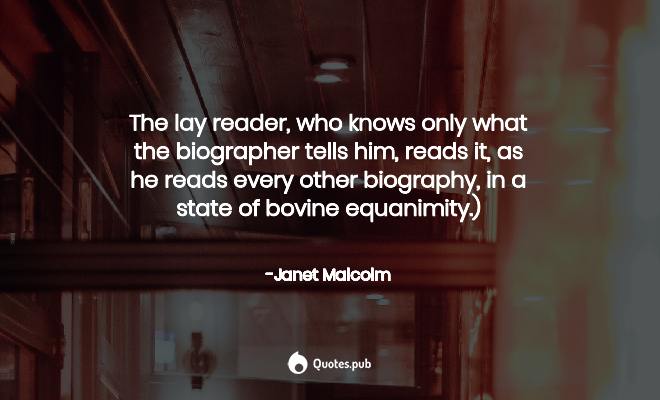 The lay reader, who knows only what the biographer tells him, reads it, as he reads every other biography, in a state of bovine equanimity.) 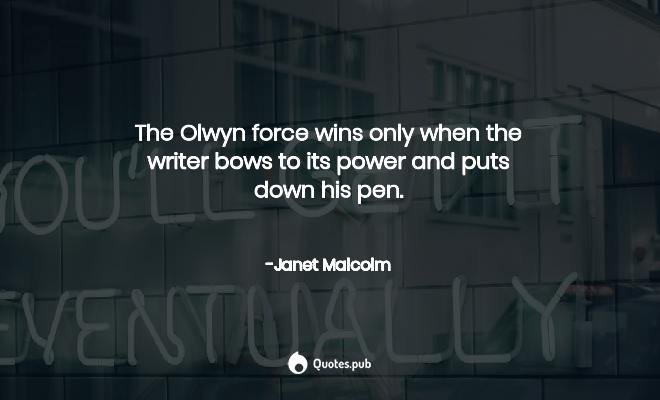 The Olwyn force wins only when the writer bows to its power and puts down his pen.